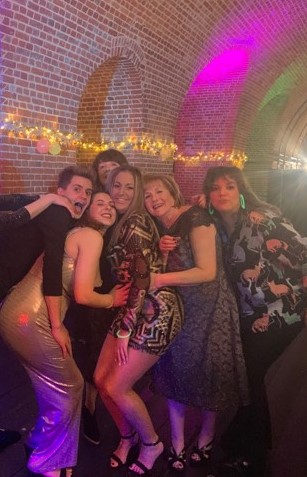 This years innovation Christmas party was amazing! The Christmas party was held at the explosion museum in Gosport. The team all arrived dressed to impress. Some outfits that really stood out was Toby and his mustard smoking jacket he looked very bouje, Alissa and her super shiny jumpsuit and of course how can we forget Kate! Less than twelve weeks after having her baby boy Kate wore a long sleeved black and gold dress and she looked amazing!

We all received a FREE glass of Prosecco on arrival and were told to go through to our tables. We had a little walk through the museum featuring the WW2 statues on our way to the venue. Gina was on her phone later that night and walked in to one of the statues and said sorry to it! She didn’t know it was not a real person she had bumped into until Emma told her it was just a statue. How funny!

Everyone gathered together as we found our seats, the tables was set with crackers, poppers and popping candy as well as a beautiful center piece. The starter consisted of cold meats, bread, spreads and olives and as we found out Lou, Gina, Lauren and Jess love olives and anyone who left them had to put them on the girls plates. For the main we had a delicious bourgeoisie, beef for the meat eaters and butter nut squash for the veggies. We also had warm mince pies and they where scrummy!

After all our tummies were full the 80s live band began singing a range of Micheal Jackson and Tina Turner. Of course our table was first up to dance! The band even played some other music for the 2000 babies that are at Innovation but everyone really went for it and some of our team had to go sit down or go outside to cool down. After an enjoyable evening everyone decided to call it a night and go home.

On Sunday everyone was feeling the aftermath of all the drinks. We had a few sore heads and lost voices because of all the singing we had done. The team where all back to normal by Monday and back into the swing of things in the salon.